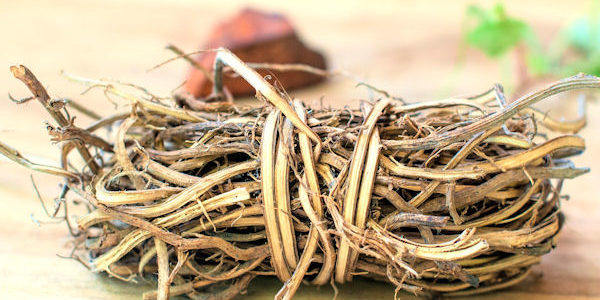 The first time I met a member of the Smilacaceae family was fifteen years ago. At that time I was using Mayan medicine to destroy my ovarian cysts, with the help of Dr. Rosita Arvigo. Red China root was one of the plants she suggested because of its unique capacity to rebuild the quality of the blood when it has been weakened by toxicity, stagnation, or other imbalances. This plant, a relative of the North American greenbriers, has traditionally been used by the Mayan people for all gynecological disturbances, fatigue, acidity, and weakness (Arvigo and Balick, 1998). I have been studying this root, commonly known in Costa Rica as cuculmeca, since that time. It not only helped my body, it inspired me to learn more about the secrets of Traditional Latino Medicine.

Of all the amazing things about cuculmeca, my favorite is the story the plant has told me about its people, its land, and how a plant’s survival can be placed at risk by the species to whom it provides untold benefits. Cuculmeca has also taught me the difference between preserving ethnobotanical information and conserving the ethnobotanical experience of the plant in the context of its natural environment and a sustainable culture of respect for its stewards.

Although the Smilax family has been utilized by the medical community for centuries, its scientific exploration has been both academically neglected and pharmaceutically hoarded. I can see that its conservation is as much cultural and political as it is biological. After a decade of devoted research, the following is the story I know so far. Cuculmeca’s genus name, Smilax, is derived from the Greek word for poison, referring to the anti-venom properties of the local Smilax aspera, as used by the Greek physician Dioscorides and the Roman naturalist Pliny almost two thousand years ago. There are more than 300 species of Smilax recorded throughout the world, many of which share similar components and therefore similar medicinal actions (Taylor, 2005). The most famous of the family is sarsaparilla (Smilax regelii), a popular alterative and endocrine tonic. It is so high in saponins that it was used early on in the industrial food revolution as a foaming agent for making sodas.

Until the spice trade of the 15th and 16th centuries, the only Smilax varieties in Europe were the native ones. It was then that eastern relatives, including Smilax glabra and Smilax china, were introduced into European botanical medicine and became known as China root in English or raiz de China in Spanish. There are references found in ancient texts from China, India, and Persia which indicate differences in the qualities and capacities of these roots (Winterbottom, 2015). These details, including those indicating the original uses of the plant, were not often transmitted in the international sale of the roots, making it difficult for physicians and herbalists to know which species were which and how to best use them.

Further complications in identity arose when Europeans arrived in the Americas and “discovered” a whole new set of Smilax species. The earliest writers appear to have given the name China root to those Smilacaceae which were tuberous, most closely resembling those of China. The name Zarzaparrilla, which translates as “little bramble vine” or “grill bramble,” was used to describe those whose roots were long and thin, along with any of the brambly Smilaxes.

The native people of the Americas had more names for the Smilaxes than we can ever know. Many of the tribal names recorded refer to the power of the plant, such as the Mayan name ko-keh-ak, which translates into blood vine (Ferrufino, 2015). One of the many names recorded by the Mexica (Aztec) people was cocolmeca, signifying a vine (mecatl) used for caregiving or sickness (cocol) in their language, Nahuatl (Siméon, 1977). This term continues to be used today throughout Central America, almost always referring to the red tuberous rhizome of Smilax domingensis, although it is also used occasionally to refer to another Smilax, a Dioscorea, or even another healing vine (Ferrufino, 2015). Cuculmeca is the only one of the native Smilax names to outlive colonization. The ubiquity of this ancient Nahuatl-based name, so far south of traditionally Mexica territories, shows us this plant’s pre- and post-colonial importance in the same category with other important plants like aguacatl and cacahuatl.

The traditional, pre-colonial systems of Native American medicine were as holistic and comprehensive as the traditional systems of China, Europe, and Africa, with which it eventually blended to become Traditional Latino Medicine. Amidst a context of violence, greed, and spiritual persecution, there were a few colonial writers that offered favorable versions of the indigenous cultures which they explored (Guzman Paredo, 1985). As I research my cherished plant ally, I find how the oldest stories hold the true magic of the plants and how they were really used by those who knew them well.

In 1829, Dr. John Hancock of the Medico-Botanical Society presented his research on sarsaparilla in British Guiana and advocated the indigenous methods of preparation over the popular European method of boiling down. Although decoction is currently considered an appropriate mechanism for cuculmecas or China roots, Hancock combined his mucilaginous, aromatic Smilax with other plants and fermented them for nine days in the sun or fireside. Meanwhile, in Mexico, the term xocomecatl, sometimes used interchangeably with cocolmecatl, actually means “soured vine”, possibly referring to a wine made from the grape-like berries or to a fermented brew of roots similar to that cited by Hancock (Rodriguez, 1959).

Enhancing the power of herbal remedies through fermentation was one of the many complementary techniques that originally accompanied the Smilax recipes–not just how much of the plant to use but all the other details involved in using the plant correctly. Early writer Pedro Cieza de Leon wrote an entire chapter on “The Admirable Root Called Sarsaparilla, Good for all Illnesses” in 1540 in Peru. His remedy for syphilis included wrapping oneself in blankets as protection against cold and wind, taking purging laxatives, and eating lightly. He also reports that the Zarzaparrilla root should be prepared as an agua, in this case meaning relating to drinks which are either cold infusions or warm infusions that have been cooled. The still common Latin American dosage, “tomar como agua” refers to how the infusion should be consumed in the place of water throughout the day (Guzman Paredo, 1985).

Hancock gives similar specifications with his Smilax remedy, including a bland diet, no alcoholic drinks, and Greek-derived humoral therapy. His thesis accuses physicians of reducing the full medicinal experience, leaving behind the holism of Galen in favor of the contemporary fashion of separating the sciences. Hancock says, “In the prevalent affection for mere descriptive botany, its more important and scientific objects have been nearly overlooked and disregarded, viz. the application of its principles to useful purposes in medicine” (Hancock, 1829). Specialization in the sciences has resulted in a separation of medicine from botany and has led to a great loss of knowledge and the taxonomic struggle that we face today with the Smilax family. The earliest accounts of purchasing sarsaparilla, China root, or cuculmeca demonstrate what is still true today–you will be sold only the root, with no evidence of the aerial parts of the plant, possibly with a scientific name which may or may not be correct. As many of my colleagues, I have been using cuculmeca for years, accepting the general virtues of the Smilax family and the many consistent recommendations from local Costa Ricans. However, the story of this plant has convinced me of the importance of having taxonomic security. I have learned that each member of the Smilax family has unique qualities, that they should be used with discernment, and that they deserve to be taxonomically distinguished.

Twenty years after graduating, it was this plant that convinced me to reconnect with my academic roots and team up with ethnobotanists who specialize in this genus. I now understand that my responsibility to conserve this plant includes knowing all its native names and properties, as well as collecting any local relatives and learning all their names, too.

I have also had to learn about cuculmeca’s complex ways of reproducing and maturing. The plant is dioecious, which means that you need both a male and a female plant within range for unassisted reproduction to take place. It may take up to 40 years for the tuberous rhizome to be hard enough for harvest, and it requires a canopy tree to climb in order to flower!

It is impossible to know how much cuculmeca has been harvested or removed from the forests of Central America over the past 500 years. Not surprisingly, the colonizers did not plant, as much as continually reap, using slavery and their repressive position with the Native Americans to fill their pharmaceutical orders. Export records show tons of plant material per year being exported to Europe and the U.S. throughout this time (Ferrufino, 2015; Winterbottom, 2015). Simultaneously, there are very few projects currently working to promote sustainable harvesting or encouraging reproduction, despite abundant research showing the Smilax family to be a good potential non-timber forest product for conservation areas.

My Smilax Conservation Project in Costa Rica is about five years old. We currently have one cuculmeca plant and a few different sarsaparillas. I planted many which did not turn out to be tuberous and many more which did not survive the transplant. Creating an ethnobotanical sanctuary has taught me the importance of going beyond propagation, identifying the original stewards of the plants, and collecting as many details as possible about variations, environmental factors, and indications of use. As our plants grow, our project combines scientific research with the stories still told by those local residents, who have always shared the forest with our plants. We will know our success when our grandchildren still have this plant in their gardens and still know how to use it.

Rachel Thomas teaches traditional medicine at her wellness center & plant sanctuary Hidden Garden in Puerto Viejo, Costa Rica. She works with the community to conserve local medicinal plants and provides an academic environment for the advancement of Caribbean ethnobotany. Visit Hidden Garden at http://hiddengarden.co/conservation/smilax/ to read more about the Smilax Conservation Project and to access the Online Smilax Research Library, including cited references and more.